HomeBlogU.S./UK Indispensible Leadership in the World – a discussion

U.S./UK Indispensible Leadership in the World – a discussion

“Our relationship is special because of the values and beliefs that have united our people through the ages.”  President Obama, Westminster Hall, May 25, 2011 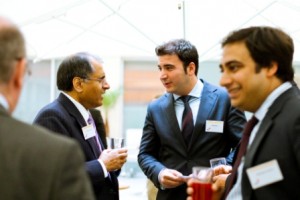 On 25th July the John Adams Society held its first event since launching, welcoming special guest speakers, Foreign Office Minister Alistair Burt MP and US Embassy Minister Counselor for Public Affairs, Sandra Kaiser, to discuss the indispensible leadership offered to the World by the US and UK. Kindly and very generously hosted by the London office of PriceWaterhouseCoopers, the event brought together approximately 40 members of the Society who heard from the guest speakers before participating in a question and answer session. 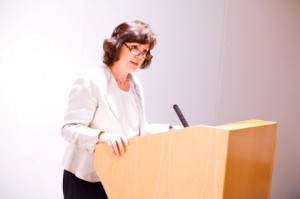 Opening the discussion, Minister Counselor Kaiser spoke of her time at the US Embassy in London and confirmed that “of all the countries around the World, the UK is the one we have most in common with”.  Acknowledging that the special relationship had not always been without tension, she went on to quote President Obama’s speech to Parliament, “ in a world which will only grow smaller and more interconnected, the example of our two nations says it is possible for people to be united by their ideals, instead of divided by their differences; that it’s possible for hearts to change and old hatreds to pass; that it’s possible for the sons and daughters of former colonies to sit here as members of this great Parliament, and for the grandson of a Kenyan who served as a cook in the British Army to stand before you as President of the United States.” The Minister went on to talk about the shared challenges of the past and the future and the importance of our two countries continuing to work together to help in the struggle against famine in Africa and in terms of the new world order, the Arab Spring and the importance of our dedication to lift millions out of poverty around the World. 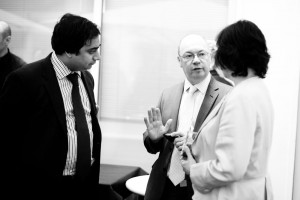 Foreign Office Minister, Alistair Burt MP, responded.  The Minister spoke of our two nations having a “sense of confronting adversity and not turning away”.  He spoke of our joint determination to confront regimes that have “gone wrong” and to work with countries around the world even if they are “not an easy country”, especially when they are a component in safeguarding the future stability of the planet.  The Minister spoke of a joint “spirit of discovery in our backgrounds” and noted that our politics “bind us together for the future”.  He went on to explain that we have to be courageous and be prepared to ask the questions to which we might not know the answers, but to which we desperately want to understand the answers.  He explained that we have to understand the changing world around us and work together to find the answers in the future.  Mr Burt spoke of the serious issues that confront us explaining that the medium future might be uncomfortable given the lack of answers to some of the questions in today’s world, but that we have to have the confidence to ask, especially when confronting threats like cyber terrorism and energy security.

During a period of questions and answers, both guest speakers offered their views on a range of subjects from social media and the special relationship to major demographic changes in the USA, the Arab Spring and the proceeds of corruption.

Richard Stephenson, vice chairman of the John Adams Society, said, “We were delighted and very honoured to be able to feature two high calibre speakers for our first event since launching.  We enjoyed a very interesting discussion and our members had the chance to quiz our speakers on some fundamental issues of the day.  The John Adams Society is all about bringing together those people with an interest in the special relationship that exists between the US and UK, so what better way to start our series of events than to closely examine that very thing.  A most enjoyable and informative event that sets a high bar for our future programmes.”