As we rush around London from day to day it’s easy to miss the history on every street corner – the plaques, the statues, the details high above our heads.  So on Saturday 31 January, JAS teamed up with Blue Badge guide Simon Rodway to retrace the route of President Wilson’s historic 1918 carriage ride.  Wilson, who had arrived in London on 27 December, was treated to a hero’s welcome as thousands lined the streets of his route from the West End to the St James’ Palace.  As we walked in the steps of the wartime President and architect of the League of Nations, Charing Cross Station (which 100 years ago was a sanded courtyard crowded with soldiers and cheering well-wishers) was the obvious start for an eye opening and throughly entertaining tour. 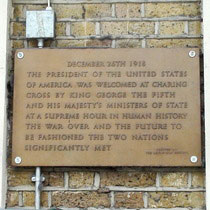 Over two hours, JAS members and Embassy colleagues were treated to a fascinating history lesson on a walk from Charing Cross to Buckingham Palace, taking in Trafalgar Square (where inebriated Canadian and Australian troops lit a bonfire which burned a captured German gun and damaged the marble plinth); the George Washington statue at the National Gallery; the site of the old German Embassy (where a plaque is dedicated to the memory of the Ambassador’s dog); the imposing buildings of St James’ Palace; and the streets and elite clubs of Pall Mall (which in 1918 were decked out with bunting to welcome the President).  [insert picture]

Our thanks to Simon Rodway –  www.silvercanetours.co.uk

On Saturday 28 March JAS continues its London history tours, this time to experience the 1960s East London of the Kray twins.

Samantha Watson is a trained journalist and digital communications specialist. Her career spans working as a local reporter to writing for national and international publications including the historical New York Amsterdam News. She has worked extensively with a number of charities to develop communication strategies, and implement digital media plans to enhance engagement and campaigning. As a former participant on the US State Department’s International Visitor Leadership Program (IVLP) she has a keen interest in how international communities campaign and engage both socially and politically. Twitter: @peeksawa www.samanthawatson.org.uk